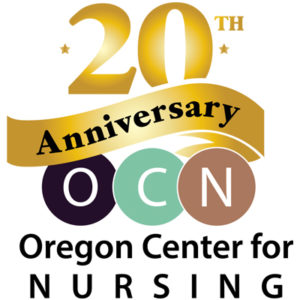 When the Oregon Center for Nursing was first founded in 2002, the state was facing a serious shortage of nurses in certain settings. Sound familiar?

Today, the profession continues to face staffing pressures, this time from a global pandemic that led to a “Great Resignation” and acute shortages of nurses.

As the Oregon Center for Nursing (OCN) celebrates its 20-year anniversary in 2022, the organization and its founder are reflecting back on the journey and growth of the organization. One thing that all can agree upon is the continued need for a nonprofit organization to research, support and voice concerns for Oregon’s nursing workforce.

Addressing the needs then (and now)

Two decades ago, leaders at the National Council of State Boards of Nursing realized the profession was facing a problem that couldn’t be fixed by offering nurses higher wages, recalled Dr. Deborah Burton, who served on the group’s board at the time. 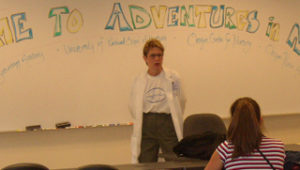 The profession was staring down a wave of retirements, even as the U.S. population was aging, increasing the demand for nurses. Meanwhile, the pipeline of graduates starting their careers in nursing appeared too little to meet demand. The nursing workforce, which was overwhelmingly white and female, lacked the diversity of the population of patients coming in the door.

At the same time, no independent nonprofit organization focused on workforce forecasting, Burton said. After the first one was created in North Carolina, Burton realized “Oregon was really well positioned for the same sort of thing,” she said. Nursing leaders collaborated to form the Oregon Nursing Leadership Council, which founded OCN in 2002. Within a few years, centers for nursing were being founded in states around the country, Burton noted.

One of OCN’s first priorities was addressing the pipeline of individuals entering the nursing profession, Burton said. Men, as well as racial and ethnic minorities, were not being encouraged to pursue careers in nursing.

To start to move the needle, OCN created “Men in Scrubs,” an all-day camp for high school boys. The students were taught by male nurses, who sought to spark their interest in the field. OCN also created a poster showing male nurses from different walks of life – military veterans, athletes, a Harley-Davidson rider – and the tagline: “Are you man enough to be a nurse?”

“That thing took off around the world,” Burton recalled. Initially distributed to Oregon schools, the posters have been distributed and displayed in facilities and textbooks around the globe.

At the same time, OCN began fulfilling its mission of conducting crucial research about the workforce. In 2005, OCN published its first registered nurse workforce study recommending a range of strategies to strengthen the nursing workforce.

Meanwhile, at the OCN office, Burton often felt like she was writing grant applications just to keep the doors open. The organization needed a dependable, ongoing source of funding, said Burton.

For more than a decade, OCN used a mix of funding from government and foundation grants, contract work, and corporate and individual donations to support a variety of programming initiatives. The situation changed in 2015, when the Oregon Legislature approved adding a fee on each RN/LPN renewal and licensure endorsement. Today, the $9 license surcharge provides secure funding for core OCN objectives.

“The surcharge was actually instrumental in helping us refocus on our research agenda,” said Jana Bitton, MPA, OCN’s executive director since 2015.

Some of the challenges today are the same as 20 years ago, including a shortage of nurses in certain regions and settings. However, OCN’s two decades of data collection and analysis are allowing the organization to approach shortages in a different way.

When OCN’s work began, the organization and stakeholders committed to finding statewide solutions to address a nursing shortage. Despite introducing a variety of initiatives to support the nursing workforce, shortages persisted.

“As our body of research grew, we were able to look at more nuance in the data.”

“As our body of research grew, we were able to look at more nuance in the data,” said Bitton. The evidence showed shortages tended to be localized to certain regions or work settings.

OCN’s current research has helped illustrate for decision-makers a statewide approach to solving nursing workforce issues won’t work. “It has to be really strategic and based on location and work setting, among many other factors,” she said.

Though the organization is committed to supporting strategic, regionalized approaches to nursing issues, it also continues to work to connect nurses across the state. In 2020, at the beginning of the pandemic, the organization launched its “Friday Huddle,” a weekly virtual meeting where nurses can share their experiences, ask questions, request help and resources, and more. “It’s been a really powerful tool to unite our nursing community,” Bitton said.

Both Burton and Bitton see OCN as a forum and voice for a larger community – one that OCN will honor with its 2022 theme, “Recognize Nursing.”

“It really is this huge nursing community,” Bitton said. “Now, more than ever, is the time for Oregon to recognize the powerful impact nursing has in our healthcare system. I’m very excited about creating a vision for the next 20 years.”

About the Oregon Center for Nursing (OCN):